The rabbis insist that Judaism does not attempt to convert Gentiles, but that is not true. Who is shocked at another lie? Judaism proselytizes “Noahide Law” (sometimes, “Noachide Law”) for Gentiles.

“Maimonides legislates that it is incumbent upon the Jewish people even to coerce the rest of the world if necessary to accept the Noahide laws [Mishneh Torah, Laws of Kings 8,10] … we certainly must proselytize every human being to keep those seven laws.”

They claim that Gentiles must accept these “seven” laws as a type of simplified Judaism for Gentiles:

And Maimonides rules that only the Jews must keep the 613 commandments for ultimate “salvation”; it is enough for the gentile world to accept the Seven Noahide Laws of morality (Laws of Kings [Hilchot Melachim] 8,10). But we certainly must proselytize every human being to keep those seven laws – do not worship an idol, do not misuse God’s Name, do not murder, do not commit licentious sexual acts, do not steal, respect all creatures, and create a judicial system to enforce the first six laws.

The devil, of course, is in the details. Noahide Law is simply a Judaic iteration of Islamic dhimmitude, a Judaic slavery in which Christians are subject to the whims of the rabbis, instead of the whims of the mullahs.

Catholics certainly and even most Protestants worship Jesus Christ as True God and True Man, Second Person of the Holy Trinity and, just as in Islam, Judaism considers this blasphemy, idolatry, avodah zorah, for which the penalty is death by beheading.

In case you missed that, let me say again, Judaism considers the worship of Jesus Christ as True God and True Man, as Second Person of the Holy Trinity, to be blasphemy, idolatry, avodah zarah, for which the penalty is death by beheading.

The Jewish Encyclopedia affirms that the punishment for Christian “idolatry” is beheading.

“With but a few exceptions, the punishment meted out to a Noachid for the transgression of any of the seven laws is decapitation…”

Noahide Law subjects Christians to the rabbis, putting Christians at the level of chattel slaves whose lives are at the whim of Judaic masters. Under Judaic courts there is no equality for Christians. From the Oral Torah, Talmud, Sanhedrin 57a: 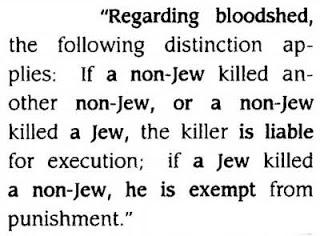 Re-read Maimonides explanation in his Mishneh Torah, chapter 10, halacha 1, about the fundamental principle of Judaism that only Jews are human, hence “Kill even the best of the Gentiles… in a time of war or in a time when the Jews have control over the gentiles.”