You are here: Home / B to L Cat / Balfour Declaration / What Is the Root Cause of the Israel-Palestine Conflict?

Why has the conflict between Israelis and Palestinians persisted for so long, and how can peace and justice finally be realized?

To answer these questions, we need to have a proper understanding of the conflict’s origins. Unfortunately, the mainstream media has not just failed to properly inform us, but presents a grossly skewed picture.

Here’s some of the standard narratives you’re likely familiar with:

Arabs were always in conflict with Jews in Palestine.
The root cause of the outbreaks of violence during the Mandate era was the Arabs’ inherent hatred of Jews.
Under the so-called Balfour Declaration, the British granted legal authority to the Zionist leadership for the establishment of a Jewish state in Palestine.
The UN General Assembly proposed an equitable solution by adopting the plan to partition Palestine into separate Jewish and Arab states, but while the Zionists accepted it, the recalcitrant Arabs rejected it out of their refusal to acknowledge the right of the Jews to self-determination.
General Assembly Resolution 181, the “partition plan” resolution, granted legal authority to the Zionist leadership for their declaration of statehood.
After the state of Israel was established through a legitimate political process, the neighboring Arab states started a genocidal war against the nascent state.
The Palestinian refugee problem that exists today is an unfortunate legacy of the Arab aggression.

The truth is dramatically different from the stories we hear from government officials and the mainstream media about how this conflict originated. Every one of the above standard narratives is false. 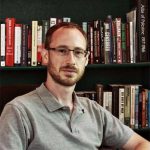 I’m Jeremy R. Hammond, publisher and editor of Foreign Policy Journal and author of several books on the Palestine conflict.

I had been researching and writing about this contentious subject for years when, at the end of 2008, Israel launched a full-scale military assault on Gaza, dubbed “Operation Cast Lead”. I had predicted this operation a few months earlier, and watched with disgust how the US mainstream media was deceiving their audience about how this assault came about and what was happening on the ground.

For my coverage of that assault on Gaza, and the US’s support for it, I ended up receiving the Project Censored Award. The media’s disgraceful coverage also made me determined to write a book to set the record straight on Operation Cast Lead and other Israeli operations, Israel’s deadly attack on a humanitarian flotilla in 2010, the so-called “peace process”, the US role, the media’s role, and much more. 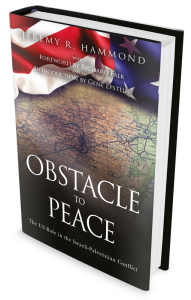 The end result of that effort is my book is Obstacle to Peace: The US Role in the Israeli-Palestinian Conflict (2016), a definitive work of contemporary history that navigates the maze of conflicting information and illuminates the path forward.

But as I set out working on that book in the wake of Operation Cast Lead, I knew that in order to understand contemporary events, historical context was needed. In order to explain why the conflict persists today, I would need to explain its origins. So I began researching more and writing about the history leading up to the establishment of the state of Israel in 1948.

That led to me splintering my book project and first publishing a short book called The Rejection of Palestinian Self-Determination: The Struggle for Palestine and the Roots of the Israeli-Arab Conflict (2009). 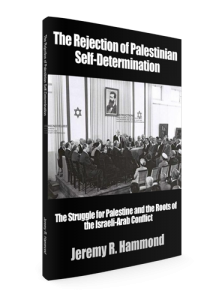 This book focuses on the crucial period from the rise of the Zionist movement until the creation of the state of Israel and examines how the seeds of the conflict were sown during that time.

Standard mainstream narratives about how the conflict originated are misleading at best — and largely fictional. The Rejection of Palestinian Self-Determination provides you with an antidote to the propaganda version of history you’ve been taught.

Here’s what a few others have had to say about The Rejection of Palestinian Self-Determination:

“Excellent short work on the founding of Israel via the wholesale violation of the rights of Palestinians. This is the book to give to people who ask what’s at the root of Middle East strife. Highly recommended!”Sheldon Richman

Author and former editor of The Freeman

“A Must Read on This Subject – Makes its case with clarity and economy. A pleasure to read, and quite convincing in its thesis about the origin of Israel.”Gene Epstein

Economics and Books Editor at Barron’s

“Essential reading…. It is clearly written, providing a succinct summary of the various letters, documents, and committees that worked on the cause of a Jewish homeland in Palestine. For anyway considering arguments about the Palestinian-Israeli problem, this work should become a necessary short primer….”Jim Miles

Writer for The Palestine Chronicle

“This is a revelatory work that brings amazing clarity to a completely obfuscated situation.” – Murlin Evans

“Mr. Hammond did an excellent job. His book is precise and to the point.” — Truth Seeker

Here’s just some of what you’ll learn in The Rejection of Palestinian Self-Determination:

Why it’s a myth that Jews and Arabs have always been in conflict in Palestine.
What Zionism is and how it impacted Palestine.
What Great Britain’s role was and how it helped fuel the conflict under the League of Nations’ Palestine Mandate.
What the infamous “Balfour Declaration” was and how it didn’t mean what Zionists claimed it meant.
How the UN “partition plan” prejudiced the rights of the majority Arab population.
Why it’s a myth that the UN created Israel, and how the “Jewish state” really came into being.
What the fundamental root cause of the conflict is that explains why it has persisted to this day.

If you want to understand the origins of the world’s most infamous ongoing conflict, this is the book you need to read.

So how would you like to start reading it right now?

Well, you can get instant access to download the e-book edition and quickly and easily empower yourself with this knowledge for just $4.99. 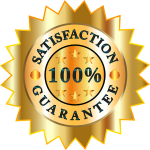 Plus, I’m so confident that you are going to find the knowledge you’ll gain from The Rejection of Palestinian Self-Determination to be of incomparably greater value than the dollar price of the e-book that if you read it and aren’t satisfied, just contact me within 30 days of purchase to let me know and I’ll give you your money back (and you’ll keep the e-book).

Buy and read it completely risk-free. By purchasing your copy of this e-book today, you’ve got nothing to lose in and a wealth of knowledge to gain.

So take advantage of my 30-day, 100% satisfaction, money-back guarantee and click the button below to purchase your copy right now and get instant access to the downloadable e-book!

GET INSTANT ACCESS TO THE E-BOOK NOW FOR JUST $4.99