You are here: Home / A Categories / Animals / The Bible is Wrong About Noah’s Ark and The Flood – The church of Truth 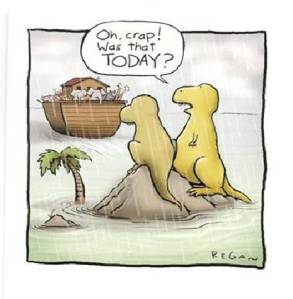 We evolved, no one lived to be 600 years old.
Case closed.

But for the sake of poetic license, we’ll look at the story as though Noah could have been alive.

In That Case, Consider This

If  the Noah story is true, how can the above not be true?

But since some can spin the above truth, we’ll move on

Truthsayer has spent considerable time analyzing and categorizing all the impossibilities of the Noah’s Ark fable. Please visit “Nonsense of Noah” to learn how really impossible the whole story is. For those of you who don’t have enough time, we present the following…

Astoundingly, the omniscient God realizes after the flood that mans’ imagination is evil from youth (Genesis 8:21) and REGRETS what he has done. He now allows us to be evil (free will) to this day, no different than  those he drowned in the flood. So we have to now realize that God tortured every man, woman, child, baby and unborn child (i.e. abortion) , and animal (why the animals?) on earth because he made a mistake?

After being subjected to storms like no one can imagine, earthquakes that allegedly changed the topography of the earth, the Ark came to rest within 100 miles of where it was launched! How likely is that? Oh… God guided it back there? Why? What did it matter?

It Gets Even Better i.e. worse

But if Noah was perfect (as the Bible claims he was in Gen. 6:9), then he wouldn’t have been tainted with the imperfection of sin, and just as the descendants of Adam had “inherited” sin, the descendants of Noah would have inherited sinlessness. So Noah’s descendants (which would be the entire human race) would have escaped from “Original Sin” and wouldn’t need to be “saved from their sins”. This makes the whole idea of Jesus’ sacrificial death superfluous.
Thanks to Steve McRoberts for identifying this monumental contradiction.