You are here: Home / M to Z / Biblical Discrepancies / Origins Of The Exodus Myth 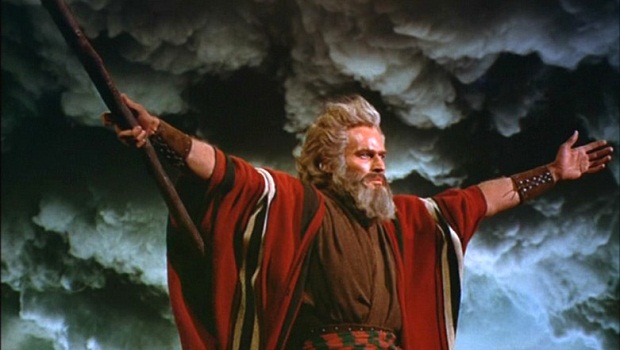 With so many to choose from, it’s difficult to decide which of the various folk tales, invented ‘histories’ and origin myths that have found themselves bound up in the same book and presented as the inerrant word of an omnipotent god is the silliest, but one of them has to be the tale of Hebrew enslavement in Egypt and subsequent escape.

It was obviously written by someone who knew little or nothing of the geography or politics of the time and place the tale was set, so we have the idiotic notion of the ‘Israelites’ escaping from Egypt by crossing the Red Sea to Sinai – which was also in Egypt. That’s like ‘escaping’ from the USA by crossing the Hudson River from New Jersey to Manhattan or escaping from the UK by crossing the Bristol channel from England to Wales. The author also has the ‘slaves’ building the Egyptian city of Raamses – which wasn’t started until some 120 after the traditional date of the Exodus.

We are expected to believe that some three million people spent nearly half a century wandering about in Sinai following a pillar of smoke by day and a pillar of fire at night and yet never left any trace whatsoever; no discarded shoes or broken cooking pots, no graves, no sign of campfires, no animal bones from the remains of meals. And, because they would have had no means to make new ones or to repair old ones, we have to assume they never wore out their shoes or clothes and their children never grew out of their clothes and needed new ones.

The author seems to have thought only about how they were going to get food and water for three million people in a desert and, having failed to think of anything sensible, invokes magic to explain it away.

So Moses brought Israel from the Red sea, and they went out into the wilderness of Shur; and they went three days in the wilderness, and found no water. And when they came to Marah, they could not drink of the waters of Marah, for they were bitter: therefore the name of it was called Marah.

And the people murmured against Moses, saying, What shall we drink? And he cried unto the LORD; and the LORD shewed him a tree, which when he had cast into the waters, the waters were made sweet:

So that’s the water magicked up then, but apparently they didn’t realise they have no food until they had been wandering around for about 6 weeks!

Then said the LORD unto Moses, Behold, I will rain bread from heaven for you; and the people shall go out and gather a certain rate every day, that I may prove them, whether they will walk in my law, or no.[My emphasis] 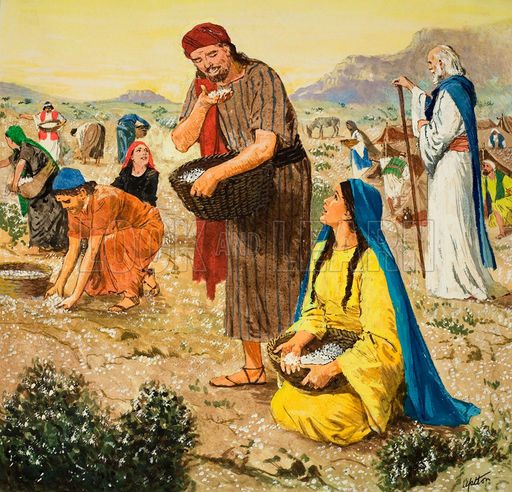 But before we even get the the unlikely tale of three million people wandering about in an Egyptian desert for forty years without the Egyptian authorities noticing them we have to plough through some equally implausible tales such as the ‘ten plagues’, none of which the Egyptian scribes saw fit to make note, just as they failed to make note of the destruction of their entire army or the economic collapse that would have followed the loss of so many slaves all at once.

Actually, the plagues sort of develop out of the magic contest between Aaron who is supposedly empowered by the Hebrews’ god and Pharaoh’s magicians who presumably get their powers from lesser gods, even though there aren’t any.

And then, of course, Pharaoh could muster up 600 horses to pull the chariots from amongst all the dead livestock from the 5th plague (Exodus 14:7).

This is quite obviously a badly thought through list of various natural disasters, some of which could be connected, most of which have been exaggerated, threaded together and compressed in time in order to justify or excuse something, and here we may have a glimpse of what the Exodus story was really about. To get to the truth we need to understand what was going on in Egypt at about the time, and what was going on tells us something about the origins of monotheism and possibly the Joshua/Jesus myths too.

In 1351 BCE (or 1353 BCE in some sources) King Amenhotep III of Egypt died, leaving his son, Prince Amenhotep to succeed him as Amenhotep IV. Amenhotep’s queen was Nefertiti.

Some Egyptologists believe his mother, Queen Tiye, was a Mitanni from Armenia and may have introduced him to the monotheist Zoroastrian religion then popular in Persia – the direct forerunner of Parsi – and possibly one source of Mithraism. Another account says Amenhotep IV had a dream in which he was told there was only one true god out of the entire Egyptian pantheon, and that god was Ra-Horakhty (or Re-Harakhti), the sun god or Aten.

Wherever he got the idea from, Amenhotep IV adopted the name Akhenaten (beloved of Aten) and set about building new temples at Karnak near Thebes (modern Luxor) and redecorating the temple of Amun-Re to show himself worshipping the Aten. He then built a new city and temple complex named Akhet-Aten (modern Amarna). For a while this new religion co-existed alongside that of Amun-Re and of other gods such as Thoth and Horus. Polytheist Egyptian society, like that of later Greece and Rome, was traditionally tolerant of other religions. Towards the end of his reign, however, Akhenaten tried to expunge other religions and transform Egypt into a monotheist state recognising only one god – the Aten.

His reforms did not survive him, however and his more famous son, Tutankhamun, (more famous because he contrived to get buried in a tomb which was never robbed until discovered by Howard Carter) may well have met a violent and untimely death. Akhenaten’s temples were defaced and dismantled, the old priesthood and the old religious order was restored. The Eighteenth Dynasty was overthrown and within 12 years of his death Akhenaten was referred to as ‘the enemy’.

More to the point so far as the Exodus myth of the Hebrews is concerned, the Atenists, especially the priesthood, were very probably expelled or at least forced to flee from Egypt to escape persecution. In all probability they fled north up the Nile valley from Thebes then East into the Dead Sea/Jordan River area where they merged with the local population and founded the monotheist form of Judaism, creating the Exodus myth as their preferred version of their flight from Egypt. Part of the myth included their anecdotal and highly exaggerated propaganda, blaming the Egyptian rulers for all the natural disasters they could think of for disobeying the Aten, and for which they may have been blamed by the establishment to turn the population against them, and of course nominating themselves as the chosen people of Yahweh, top god of the Hebrew pantheon, and so obviously the Aten.

The Atenists are quite probably the Essenes who are generally credited with introducing monotheism to early Judaism, and of course, claiming their historic right to leadership of the faith, they also had to incorporate tales of being given the ‘Laws’ during their flight, grafting, not entirely successfully, at least two different versions of how these were given by Yahweh when he was still a volcano god. (See Another Ten Commandments).

I’ll conclude this with the following from an Israeli, Ze’ev Herzog:

Biblical scholars suggested a quarter of a century ago that the conquest stories be viewed as etiological legends and no more. But as more and more sites were uncovered and it emerged that the places in question died out or were simply abandoned at different times, the conclusion was bolstered that there is no factual basis for the biblical story about the conquest by Israelite tribes in a military campaign led by Joshua.

The Canaanite cities: The Bible magnifies the strength and the fortifications of the Canaanite cities that were conquered by the Israelites: “great cities with walls sky-high” (Deuteronomy 9:1). In practice, all the sites that have been uncovered turned up remains of unfortified settlements, which in most cases consisted of a few structures or the ruler’s palace rather than a genuine city. The urban culture of Palestine in the Late Bronze Age disintegrated in a process that lasted hundreds of years and did not stem from military conquest. Moreover, the biblical description is inconsistent with the geopolitical reality in Palestine. Palestine was under Egyptian rule until the middle of the 12th century BCE. The Egyptians’ administrative centers were located in Gaza, Yaffo and Beit She’an. Egyptian findings have also been discovered in many locations on both sides of the Jordan River. This striking presence is not mentioned in the biblical account, and it is clear that it was unknown to the author and his editors.

The archaeological findings blatantly contradict the biblical picture: the Canaanite cities were not “great,” were not fortified and did not have “sky-high walls.” The heroism of the conquerors, the few versus the many and the assistance of the God who fought for his people are a theological reconstruction lacking any factual basis.

Origin of the Israelites: The fusion of the conclusions drawn from the episodes relating to the stages in which the people of Israel emerged gave rise to a discussion of the bedrock question: the identity of the Israelites. If there is no evidence for the exodus from Egypt and the desert journey, and if the story of the military conquest of fortified cities has been refuted by archaeology, who, then, were these Israelites? The archaeological findings did corroborate one important fact: in the early Iron Age (beginning some time after 1200 BCE), the stage that is identified with the “settlement period,” hundreds of small settlements were established in the area of the central hill region of the Land of Israel, inhabited by farmers who worked the land or raised sheep. If they did not come from Egypt, what is the origin of these settlers? Israel Finkelstein, professor of archaeology at Tel Aviv University, has proposed that these settlers were the pastoral shepherds who wandered in this hill area throughout the Late Bronze Age (graves of these people have been found, without settlements). According to his reconstruction, in the Late Bronze Age (which preceded the Iron Age) the shepherds maintained a barter economy of meat in exchange for grains with the inhabitants of the valleys. With the disintegration of the urban and agricultural system in the lowland, the nomads were forced to produce their own grains, and hence the incentive for fixed settlements arose.

The name “Israel” is mentioned in a single Egyptian document from the period of Merneptah, king of Egypt, dating from 1208 BCE: “Plundered is Canaan with every evil, Ascalon is taken, Gezer is seized, Yenoam has become as though it never was, Israel is desolated, its seed is not.” Merneptah refers to the country by its Canaanite name and mentions several cities of the kingdom, along with a non-urban ethnic group. According to this evidence, the term “Israel” was given to one of the population groups that resided in Canaan toward the end of the Late Bronze Age, apparently in the central hill region, in the area where the Kingdom of Israel would later be established. [My emphasis]

There is no archaeological or extra-biblical historical evidence for any of the Exodus story for the simple reason that it never happened. The entire thing is a concoction of political propagandists and religious exiles grafted onto the origin myth and tribal genealogies of a band of Bronze-Age Canaanite hill farmers, shepherds and goat-herders with delusions of grandeur.