You are here: Home / M to Z / Biblical Contradictions / Christianity – Absurdities of the Infallible Bible

The absurdities of the bible are used to indoctrinate children still. It all began with Adam and Eve who led the human race into sin! When God made woman in the Yehouistic creation story, he cut out one of Adam’s ribs and made it into a woman. So, women are inferior beings, only made as an afterthought. Few preachers would say it was a myth, but the truth is the exact opposite. Males are the afterthought—the first sex was the female. Everyone begins life as a female but by birth about half develop features of maleness. Here a few biblical absurdities and contradictions are considered.

Just as the historical books of the Old Testament are not history, so the Gospels are not biography.

Northrop Frye, The Great Code: The Bible and Literature, 1981

Absurdities of the Bible

It would take a long time to go through all the absurdities of the bible, absurdities which are used to indoctrinate children still. Here are a few. Of course, it all began with Adam and Eve who led the human race into sin! When God made woman in the Yahwistic creation story, he took one of Adam’s ribs and cut it out and made it into a woman. Naturally, then, women are inferior beings, only being made as an afterthought. How many Baptist preachers would say it was a myth? None! There are some people who still occupy Christian pulpits who say it is, but many Christians would say by so doing the vicar is putting his immortal soul in danger, and not long ago they would have sent them to the stake to prove it. The truth is the exact opposite. Males are the afterthought because the first sex was the female sex. Everyone begins life as a female but by birth about half have developed secondary features of maleness.

Actually, Genesis has two different accounts of the creation of man, one of them mentioned twice:

Male and female he created them and blessed them and called their name man on the day of their creation.

It is obvious that these statements—in which men and women were created in one act, both sexes together, equally and at the same time—contradict the second story of the creation of mankind—that of Adam and Eve, in which the two were made separately, Adam first, then Eve from one of Adam’s ribs, and at different times—the story that is biologically untrue. Whence did this curious and mistaken story arise? In ancient Babylonia, the Sumerian word “ti” meant both “rib” and “to make alive”. The goddess, Ninti, is the Lady of the Rib, and the Lady who makes Alive. She was made by Nimhursag to heal Enki’s sick rib. Plainly a memory of the Sumerian myth has been recast in Genesis with Eve not being beneficial to Adam as Ninti was to Enki, but dependent on the male figure to suit the Jewish priesthood. The message of Genesis is that women are secondary and inferior to men, and are not to be trusted. Even so, Eve is the “Lady who makes Alive”, just as Ninti was, and is called “mother of all living” (Genesis 3:20).

In the biblical story, the woman turned out to be a bad lot, which an omniscient God ought to have known anyway, and she got Adam to disobey God’s instructions. God wanted Adam and Eve to stay ignorant, so they were not allowed to eat of the fruit of a certain tree which would give them knowledge. Eve learnt about this from the Serpent and persuaded Adam to have a bite. God has punished people ever since. Nice God!

What has the human race done that was so bad? Why should eating the fruit of the tree of knowledge bring sin into the world? What are these sins? Did anyone really have to save mankind from their sins in a miraculous way? It is an absurd piece of theology which priests say people must accept on faith. Why? Because reason won’t confirm it.

The bible says the Tower of Babel was so named:

because the Lord did there confound the language of all the earth, 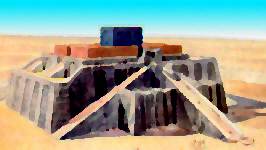 the name “Babel” supposedly deriving from “balal”, “confound”. The Holy Ghost was kidding us again! The cuneiform tablets found in the ruins of Babylon tell us exactly what the Babylonians called it—Bab-ilu, “the gate of God”, sometimes written with two signs, a gate and god, so there can be no doubt about it. Now the obvious etymology of Babel in Hebrew is precisely the same, “the gate of God”, so it has nothing to do with confounding. The place was a temple of seven platforms, each tinted a different colour, and each dedicated to one of the seven planets. The story of the confusion of languages was a reflexion of the cosmopolitan nature of the country that Babel represented.

In the story of Daniel in the Lion’s Den (Daniel 6) the God-fearing and divinely protected Daniel is saved by the power of God. The same God allowed a gross injustice for a fault they did not commit to the royal officers, who were simply carrying out their orders, and to their innocent wives and families, though God’s supernatural power could have prevented it.

In the exodus from Egypt (Exodus 7) we find the story of Moses who led the Israelites from Egypt into the Promised Land. Moses had a miraculous rod which could change into a serpent and draw water from a rock. The story is supposed to be set about 1400 BC but was not written down until over a thousand years later. The author of the story therefore had knowledge of the identical story of Bacchus or Orpheus who had a rod with the same miraculous properties and who also passed through the Red Sea dry shod at the head of his army. Nothing of either story is recorded by any historian and it is likely to be purely mythical. Alexander the Great experienced the nearest to it when crossing a tidal estuary in asia Minor, and this might have been the source of the myth.

Almost every nation of antiquity had a legend of their holy men ascending a mountain to ask counsel of their gods. Minos, the Cretan law-giver, ascended Mount Dicta and received from Zeus the sacred laws. A similar legend is told of Zoroaster, to whom Ormuzd handed The Book of the Law—the Zend Avesta. When the Old Testament was being written down by priests after the Persian colonization, they used many elements of the myths of the country in which they had previously lived before they were captive. Their saviour, the warrior king Cyrus, the Persian, was almost certainly a follower of Zoroaster, and post-exilic Judaism is constructed from the Persian religion.

Joshua was very righteous in the sight of God and the great Israelite general who led them into the land of Canaan after the death of Moses. He was busy killing the people he found there to make room for God’s people, but found himself short of time at the battle of Jericho. He turned to the mountain top and said to the sun, “Stand still till I finish this job”, and it stood still for a day! Joshua said to the sun, “Stand still”, and it stood still? Are Christians seriously expected to believe this to gain salvation? It is a greater miracle than the world wide flood, and arguably than the resurrection of a dead man, since that could have been a mistake.

Ancient Jewish authors thought that if the sun stood still, the night would not come on. But the motion of the sun through the heavens is only apparent, being caused really by the rotation of the earth on its axis. The earth would have had to have stopped rotating! So if Christians reject this story because it defies all reason, are they wicked and doomed to hell fire? Have they got to get rid of all their knowledge and common sense to save their souls? Some Christian preachers say precisely that!

Samson’s six exploits are from the labours of Hercules. Now Hercules was a sun god and his twelve labours were an allegorical account of the sun’s journey through the zodiac. The Jews, at one time in their history worshipped a sun God, as the bible itself bears endless witness to. Originally, Samson, whose name means the sun, Shamas, also had twelve labours but six have been lost or deliberately dropped to loosen the connexion.

In Matthew 12:40, Jesus who, the Christians say, is God in human garb guarantees the truth of the story of Jonah and the big fish. Jonah is swallowed up by a fish within which he lived three days and nights, praying to God. God answered his prayers by making the fish vomit on to dry land and among all the contents of the fish’s stomach was Jonah, alive and well! Christians are fond of miracles but it takes some gullibility to believe this one.

Jesus was born of a virgin. Could anyone get any positive evidence that would compel believe in this story today? No sensible person could consider it today without artificial insemination but there were at least four miraculous births recorded in the bible—Sarah’s child, Samson, John the Baptist and Jesus. Miraculous births were fashionable in those days, especially in Rome, where most of Christianity developed. Caesar had a miraculous birth, Cicero, Alexander the Great—great men just had to have miraculous births.

Have the laws of Nature changed since then, or were they all fanciful? Today, such tales would be rejected, yet Christians, especially born-agains must believe their bibles without a shadow of doubt. If they do not they are saying that the bible is not true. If it is not true, it must be lying. Proof is that Jesus had brothers and sisters, and his genealogy by Matthew is traced to his father, Joseph. If he wasn’t Jesus’s father, why was he in the story at all?

There are many curious tales but also many revolting and immoral ones in the Jewish scriptures, some of which have their equals in other mythologies. The difference is that these, being biblical, are the infallible word of God which must be believed by anyone not wanting to lose their immortal soul to the flames of Old Nick:

And many more! These are the infallible or the inspired word of God—depending upon your degree of fundamentalism—which God, speaking in his aspect of the Son, advocated wholeheartedly and which Christians, for that reason, still believe to this day though most of it is incredible. Can Christianity therefore be sound in its moral teaching? According to the scriptures, which anyone may freely search, God advised or countenanced:

and other primitive acts expected of primitive people. It can be argued that these are practices that were appropriate to their time but, even if this be accepted, we have then to ask why they remain in the infallible word of God, a justification for human ghouls everywhere in Christendom.

The absurdity of believing in Yehouah as a kind or logical entity may be exposed with impunity from the pages of the Holy Book itself. A God who destroyed 70,000 of his chosen people because their king took a census (1 Chronicles 21) is too paranoid for any but the insane, the gullible and theologians to worship. Indeed it is indicative of the totalitarian power of the priesthood and the gullibility of the people that this pigs ear of a religion has survived for so long.

Adam and Eve were put in a garden where everything was lovely and were allowed to stay there on one condition—that they didn’t eat of the tree of knowledge. That has been the condition of the Christian church from then until now. Clarence Darrow said:

They haven’t eaten as yet. As a rule they do not!