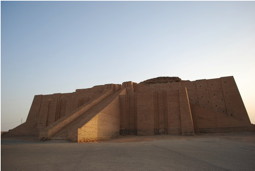 In the Sumerian myth Enlil and Ninlil (ETCSL 1.2.1), the moon god is described as the first-born son of Enlil and Ninlil, and the moon god’s three brothers are listed: Nergal–Meslamtaea, Ninazu (both underworld deities) and Enbililu (who was responsible for irrigation). There has been some suggestion that this position as the ‘first born son of Enlil‘ might reflect the importance of Ur during the Ur III period. There are also occasional references to a paternal/fillial relationship between An and the moon god (Klein 2001: 295-7), but such are probably general references to An in his role as father of all the gods (Krebernik 1993-98b: 364-5).

From the earliest periods, Nanna/Su’en was the patron deity of the city of Ur. The name of his main sanctuary in Ur was é-kiš-nu-gál, the name also used for the moon god’s sanctuaries in Babylon and Nippur (George 1993: 114). From the Akkadian period until the middle of the Old Babylonian period, the daughter of the reigning king was appointed to be the high-priestess of the moon god at Ur (Krebernik 1993-98b: 367-9). The most famous of these is Enheduanna, who is the purported author of several Sumerian literary works (e.g. the Temple Hymns, ETCSL 4.80.1 and Inana B, ETCSL 4.07.2). However, Enheduanna’s authorship has been seriously questioned (Civil 1980; Black 2002; Rubio 2009; Lion 2011). Other Mesopotamian cult places for the moon god include Ga’eš, a place in the neighbourhood of Ur, and at Urum, modern Tell `Uqair located east of Babylon, where the moon god was honoured as Dilimbabbar. Beyond the alluvial plains of Mesopotamia, a cult centre of Nanna/Su’en is attested at Harran, south-east of modern Urfa, from the Old Babylonian period onwards, where the temple name was é-húl-húl “House of Rejoicing” (Krebernik 1993-98b: 368). At Harran a long inscription was found on a stele, which commemorates Adda-guppi, the mother of Nabonidus, and which celebrates her reverence of the moon god. Another stele inscription from Harran describes Nabonidus’ accession to the throne, which is here described as being at the will of Su’en, and that he rebuilt the é-húl-húl temple (Gadd 1958).

The earliest attestation of this name dates back to the very beginning of written documentations. In personal names the moon god is attested from the Late Uruk period until the very end of the cuneiform tradition. Not only is he frequently attested in personal names, a testimony to personal piety, he is also frequently invoked in royal names from the earlier to the late periods, for example: Naram-Sin (Old Akkadian); Amar-Su’en, Šu-Sin, Ibbi-Sin (all Ur III) Sin-iddinam (Old Babylonian), Sennacherib (Akkadian: Sin-ahhe-eruba – from the Neo Assyrian period) (Cohen 1996: 9; Krebernik 1993-98b: 360; Hall 1985: 56-91).

While the moon god is commonly attested in the literature and texts of Mesopotamia, he is not as commonly reflected in the visual iconography. Anthropomorphic representations are known from the Ur III period royal iconography, but second millennium BCE images are rare, which is surprising given that Nanna/Su’en formed the most popular theophoric element in Old Babylonian names. A painting of the moon god is attested at Mari (Room 132), and these relatively rare figurative images continue down to the Neo-Assyrian period, for example Sennacherib’s rock relief at Maltai. By far the most common images of this deity appear on cylinder seals, known from across Mesopotamian history (Collon 1992: 22, 27).