You are here: Home / Myths / Gods/Goddesses / Scientists Prove That All Religious Books Are Man-Made Nonsense 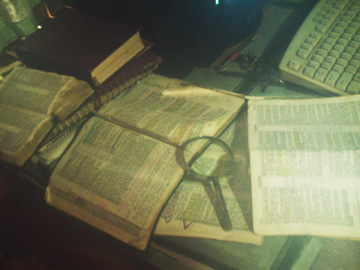 “Fables should be taught as fables, myths as myths, and miracles as poetic fancies. To teach superstitions as truths is a most terrible thing.” – Hypatia of Alexandria (370 – 415 AD)

WASHINGTON DC – USA – Scientists at the Institute of Historical Research have finally released their findings after five years of dedicated research.

The scientists, headed by Doctor Julius Sanreso, welcomed the research findings and said that it would be in the interests of those who believe in such nonsense as organised religion or creationism to accept the fact that religious books were written by men as a control system.

“Just think for one second, if ‘God’ or a ‘messenger of God’ had written that particular religious book/bible, how come the writings only occur within a very limited period in human history? Also, consider the fact, that a human writing on a piece of paper, or a few pieces of paper, is not the word of ‘God’. If they were really written by a universal God or entity, the books would not be limited to some pre-medievel costume drama but would encompass all universality, history, the future and science. Language is something created by man, not an all-seeing, all encompassing entity. God would presumably be universal and timeless as well as all-knowing, as is the universe, therefore these man-written books and scriptures, are just that, man-written linguistically created nonsense used to control men and women thousands of years ago. Why would ‘God’ write anything anyway? One must consider the fact that, even now, there are religious zealots and ordinary people still entrenched in a control belief system that is so far removed from reality that it borders on madness. There is no rational or scientific way that organised religions can have a modicum of truth or factual reality because of the very reason that these books are entombed in the time that they were written. These books should therefore simply be viewed as limited parables and historical fiction, as well as a lesson in how millions of people can be so easily controlled.”

The research paper also came to the conclusion that reward/punishment religions, as control systems, were losing their grip on most of the population of the world and only a few die-hard fanatics and delusional maniacs were carrying on with the flame of idiocy.

“The game is up for all religions, how long can this sham carry on, with their ridiculous outdated ceremonies? The priests are deceivers, and they need to come up with some pretty radical solutions to their thousand year old magic trick. People aren’t as dumb or easily swayed as they used to be thousands of years ago, they actually have reasoning powers and can see through the utter nonsense of organised control systems like religion.”

The problem for the world’s political leaders, is that slowly, humans who were controlled for so many years by fictitious writings, may suddenly lose their controlled ‘faith’. This could be quite dangerous, because it would mean that these people would suddenly wake up and realise that they have been fooled for so long by being communally hypnotised.

“We must ensure that the people who have been fooled for so long by fictitious belief systems utilised to control humans do not get too angry when they realise that what they believe in is nonsense written by humans utilising human created language. This could be dangerous for society, so we must either let them carry on believing their fiction or try to somehow support them when they realise the truth,” Dr Sanreso said.